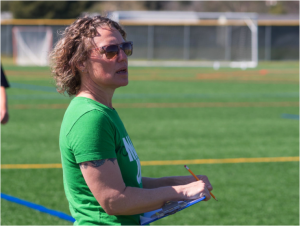 “Ultimate has provided a built-in community of friends with like interests and like minds. Since moving to the Bay Area and getting involved with Bay Area Disc Association, this community has grown exponentially… I am inspired to see new generations enjoy this sport. I hope to inspire them in the same way my friends did me: to grow as an athlete and as a human being, to be the best that they can be in everything they do.”

As a young girl in the 1970’s and 80’s, I was lucky enough to have parents who supported me to participate in as many community, recreational and school sports as I wanted. I tried softball, soccer, track, tennis, water skiing, swimming, diving, kayaking, river rafting, hiking, rappelling, spelunking and gymnastics. Soccer stuck with me and I was a founding member of the girls soccer team at my high school in my sophomore year. I played well enough to make the sports section of the papers on a few occasions and decided to stick with it into college. In so many ways, sports was something that saved my life as a kid. I stayed healthy, and even when I decided to dabble with alcohol and cigarettes in my teens, I “cut down” because it hurt my sports fitness.

Unfortunately, while in college, I hated soccer. My college coaches yelled at us to motivate us, telling us we were slow and stupid. I quit mid-season after noticing both myself and the other players become more and more low, feeling bad about our individual selves and our team. I thought I would never play another field sport again. I tried solo fitness activities like running and biking, even training for a mini triathlon at my university. Still, for me, there was no feeling like being a part of a team, running around for hours on a field with my teammates, working together to get that *win*. Then, at age 20, I was talking with a friend about my frustration with solo fitness activities and my longing for fun team sports. They mentioned that a sport called “Ultimate Frisbee” was different. I was skeptical, but willing to try it out.

It turns out that Ultimate is different. Oh, it has the

elements I love about team sports: fast paced action; highly refined skills; sprinting my butt off up and down the field for hours; no one person can win or lose a game; team chemistry is key. But, as the only field sport that remains mostly self refereed based on an honor system called Spirit of the Game well up into the highest levels of competitive play, Ultimate is very, very different. Plus, also all the way up to those very competitive levels, men and women play together on coed teams. There is a place for every body type and physical skill on the field to have a chance to shine.

On top of that, the community that this sport builds is rare in team sports. Every person on the field is expected to stay in integrity with an honest assessment of fair play, as well as trust their fellow teammates and opponents to work from that same honor system. Every person on the field is included and it is understood that inclusivity is key for a winning team. Ultimate as a sport builds a strong, caring community of friends and attracts folks who are willing to continue the traditions of Spirit of the Game on and off the field.

24 years later, Ultimate continues to feed my soul. Generally, it is a way of life for me. Ultimate keeps my physical and emotional system strong and vital. Every place I have lived, and in every phase of my life, Ultimate has provided a built-in community of friends with like interests and like minds. Since moving to the Bay Area and getting involved with Bay Area Disc Association, this community has grown exponentially. Bay Area Disc provides leagues year round for playing as well as sponsoring multiple tournaments for all skill levels. I rarely play tournaments anymore and am not playing on competitive club teams, mostly sticking to Bay Area Disc leagues and pick up games. Every opportunity I have to walk on that field, I take it with enthusiasm.

This includes my current opportunity to coach and teach Ultimate to high school and middle school kids. Teaching this sport that I love and growing the sport of Ultimate in the Bay Area has been a rewarding choice.  Participating in youth events run by Bay Area Disc has given the youth I coach even more chances to learn about Ultimate and increase their skills through leagues, clinics and sponsored tournaments. I have had the opportunity to increase my coaching skills through a variety of coaching clinics and the annual Youth Ultimate Coaching Conference – happening on March 5, 2016 – run by Bay Area Disc. I am infinitely grateful for my friends who taught me Ultimate many years ago and the many positive ways that Ultimate has changed my life since then. In the work that I do as a coach, I am inspired to see new generations enjoy this sport. I hope to inspire them in the same way my friends did me: to grow as an athlete and as a human being, to be the best that they can be in everything they do. 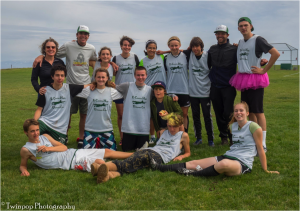 Julie Barr is currently coaching a coed high school team at El Cerrito High School, EC HUC, founded last year by her son and two of his friends. She helped the team get started last year with her husband, Joe and this year they have pushed to start a new team at Korematsu Middle School, which feeds into ECHS. Julie began playing in 1991 in Knoxville, TN after college and has played for many women’s and coed teams over the last 24 years. Julie also co-founded (with Joe) a summer league in Marin County, CA called Marin Ultimate Summer League (MUSL) that has been running consistently since 2008, and became sponsored by Bay Area Disc within a couple years. She currently resides in Richmond, CA and mostly plays in leagues and pick up games, but stays involved by captaining league teams and coaching local youth in different capacities.