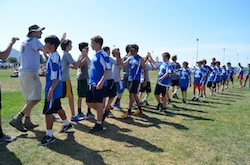 Twenty teams from the Middle School and High School Divisions traveled to Morgan Hill, California on April 26 and 27 to compete in the second annual Spaghetti Western. The two-day tournament attracted over 250 Ultimate players representing teams from across the region.

View the photos from Spaghetti Western 2013 and checkout the tournament highlights and full tournament results below.