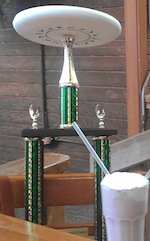 This spring the San Francisco Rec. League welcomes a new tradition. For the first time in league history the Tuesday and Thursday champions will compete in a crossover game to determine one league champion. There is more than just bragging rights on the line because only the winners will earn the right to hoist above their heads the Currier Cup.*

The San Francisco Rec. League is known for introducing new players to the sport, and above all else, promoting Spirit of the Game. A hallmark of the league is its tight-knit community. The primary goal of the Currier Cup is not to change what is already good about the popular league but to build upon the qualities that make it great and bridge the Tuesday and Thursday leagues.

At least that’s the hope of the Currier Cup’s architect, Adam Currier. “I want it (the Currier Cup) to be something that unites the players of Tuesday and Thursday because we play different nights, but we’re all part of the same community,” says Currier. “The league has given me so much in terms of playing experience, captaining experience, community and friends that I wanted to give back. A gaudy trophy with a Frisbee on top seemed like a good way to do that.”

The Currier Cup may carry the founder’s name, but the trophy has no permanent owner — one of its many distinct characteristics. Every season the cup will pass to the new champions, and every championship team will have its name and the name of its captain engraved on it, chronicling the history of the league and its players.

What team will earn the right to bring the trophy home this season? Only time will tell…

*The Currier Cup received its name through a team vote by the inaugural championship team.