Bay Area Disc Association’s 4th annual Spaghetti Western Youth Tournament took place April 25-26 in California, with 36 teams in U19 and U14 divisions. Read on to learn what went down on the windswept fields, between determined opponents facing off across the broad expanses–as told by the players and coaches themselves!

“My expectations were to roll… And we did.” said Khalif El-salaam, coach of Black Square.

In the U19 division the Seattle team was impressive all weekend. The final was no exception, where they beat Summit Storm from Bend, Oregon 15-4. Manny Eckert, from Nathan Hale High, is behind this group of friends: “..this is my senior project…I wasn’t expecting us to steamroll everyone…we barely practiced at all before the tournament.”

“Black Square was a notch above” said Foothill coach, Rand Wrobel. They looked much stronger than Fryz, another all-star team from Seattle, that last year at Spaghetti Western didn’t make the final and only took 3rd place. 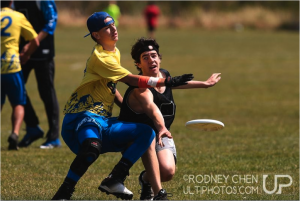 Black Square never gave up more than 6 points throughout the tournament. Manny noted: “My overall experience was excellent. We came down to play ultimate, and we got to play seven games. However, I do wish that we encountered a little more challenge in the games. I expected Berkeley to be a competitor, but they really fell off.”

In fact some unexpected drama developed at the fields. BHS Coup, runner-up at Western Regionals, and States and Spaghetti Western champs in 2014, was also undefeated during the spring league. However, they couldn’t recover after a tough 3-8 defeat against Summit Storm in the first game of the tournament. Their 0-4 finish on Saturday pitted them against their old nemesis, Mud Pit Atascadero, out for a different ending than last year’s final. Trumped at quarters, Coup then rallied to take 5th place.

“I think the experience of a team like Berkeley High is the best example of why Spaghetti Western is a great event. They dominated the local league but came to this event and saw how much room they still have to grow. Young players need to be challenged and have something to aspire to, and this event was a great way to reinforce that!” said Adam Farren, President of Bay Area Disc Association, who presided on day 2.

Meanwhile, Aaron Switzer, Summit’s coach, expressed some frustration about the tournament being open to both club and school-based teams. “I was surprised that you allowed a Washington select team into the tournament,” he noted. “I thought it was a disaster for West Coast high school ultimate when Washington switched their season to the Fall and the ramifications are now being felt in tournaments like yours. Washington does not have high school ultimate teams now in the Spring like all of the other states in the West so I get it – those kids want to play some disc in the Spring… But I’m not sure what to do as a coach. Do I bring my high school team down knowing that the best they’ll be able to do is second? Tough decision.”

Final standings and results indeed help gratify teams for their hard work, but more important is the willingness to be challenged and put in one’s best effort no matter how easy or difficult the game. As the Black Square coach reported, his best memory was playing Foothill for the second time in the semis: “They were our best game because they never gave up, even after besting them pretty well on Saturday. When it came to Sunday play they came out firing and I think they were the only team to actually make everyone play 100%.” 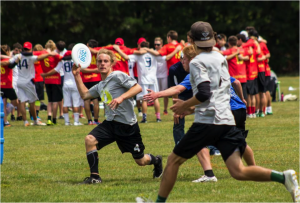 Bay Area Disc’s goal for Spaghetti Western has always been to host the best ultimate at the youth level. With its openness to club teams, the tournament seeks to complement USA Ultimate’s outlets for school-based tournaments. Hand in hand with this aspiration, we also aim to help build character and friendships through the most valuable aspects of this sport: self-officiation, integrity, empathy, respect. In short: Spirit of the Game!

One tool we’ve introduced to support this goal is the Spirit Circle. Spirit Circles haven’t been common in the US but are popular around the world. More recently, USA Ultimate at the youth level, and several college and club teams that compete internationally are rediscovering and implementing this age-old tradition. The circle pushes the boundaries of physical and verbal interaction to a deeper level beyond the default “good game” and high five. It is a special moment that brings opposing teams together, reduces post-game frustration, and facilitates communication.

“The level of teams was so high,” said Blake Jordan, one of the Sky View High School captains (Utah) “…but the spirit level was even higher. We were all there to play ultimate and get to meet new fellow players from very different areas. Everyone played with intensity and passion, but as soon as the game was over we were great friends and wanted to talk and get to know more about one another. Very classy teams.” 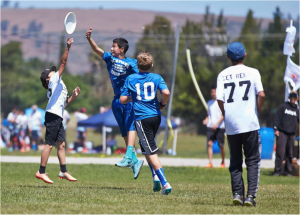 Abby Christopher and Erik Perkins, coaches of Kirby Santa Cruz, echoed this sentiment: “[we] expected a well-run, fun, spirited, competitive tournament and that’s what we got…the spirit circles at the end of the game with San Leandro and Disception really felt like it brought the students together. Also memorable was the level of play/efficiency of a spirited Seattle Black Square team (and coach).”

This year’s Spirit Award winner was Mud Pit of Atascadero. Josiah Mort, former player and now young coach of the team explains: “Overall the other teams showed great spirit! Very few conflicts on foul calls and such. Our approach to the SOTG is to have fun on the field. A smile goes a long way! It’s not something you can teach, every player we have plays because they love ultimate!”

In the U14 division, Charlie Mullin, one of the Los Angeles Flyers coaches, gave this consideration: “Our overall experience was wonderful, with a combination of thrilling challenges, gorgeous weather, and a warm community feeling. My best memory is the dedication to continuing the Spirit Circle tradition. A lot of adult play short changes this important ritual and it’s a great way to emphasize what Ultimate is all about. I was very touched.” 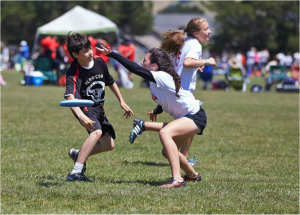 For William Sheppard Middle School from San Jose, Spaghetti Western was their very first tournament. Giulia Basile, mentor and coach, said: “One of the boys on my team who normally has to work on keeping a positive attitude was kind to himself and his teammates all day long. My whole team perked up at the Spirit Circles – they had never seen anything like them before. I wasn’t sure how they were going to take the concept, and responded with the same level of appreciation and kind words that the other team would bring.”

Even more powerful are the words of coach Mark Cisneros from Chartwell Monterey, a school for students with a range of language-related learning variations, including dyslexia: “I just want to say thank you for all the work [Bay Area Disc] put into this. If it wasn’t for you and the sport, Chartwell High wouldn’t have a sport for these kids to be a part of. These kids walk away every time, no matter the result of the game, with their heads held high because of the comradery that these Ultimate players have for one another and the respect they give one another. The spirit circle is a great way of ending a game and it’s a great thing to see and hear every time!” 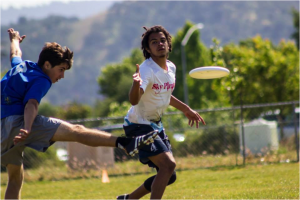 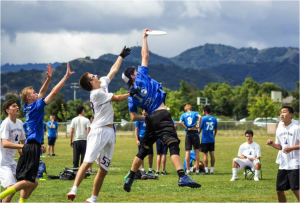 However, self-officiating and managing one’s emotions and interactions in challenging game situations are not always easy. They’re a work in progress with a learning curve.
Both kids and adults are competitive and, under pressure, fair play and constructive communication are put to the test.

Coach Erik notes: “…we had a few issues with a player or two (to the point of them not high-five-ing some of us during [a] “good game” line at end of game) and a disagreement with their coach about the game ending after hard-cap had been called. No spirit circle and I fear a few residual hard feelings after the game (but expect we are all over it by now).”

“We discussed situations with Dark Meat and Disception,” remembers coach Rand, “where they were unhappy with pick calls and contact/arm blocks, respectively, but did not firmly contest on field, just got upset. Dark Meat may still have lingering feelings.”

Daniel Haas, coach of the U14 champ Burlingame Intermediate Disc admits, “I think there [are] still players that don’t know some of the rules, so the coaches have to remind the teams… I think the Kirby coach wasn’t happy due to the fact we played zone against them.”

These conversations about how to develop athletes and the sport are part of the process and need to be encouraged. Ultimate is growing quickly at all levels and coaches are a key component. Tournaments are not only great for players, they are also opportunity for coaches to be exposed to different situations, learn, and evaluate their approach.

For example, Coach Giulia loved the 5v5 format for newer teams and liked the atmosphere and the fact that the tournament had U-14 and U-19 divisions playing next to one another.

Coach Charlie from LA (U14) had realistic expectations going in but when he walked onto the field Sunday morning and looked around he thought: “Dang! All these other teams have uniforms! This is going to be tough.”

Another coach confessed: “I would rather be known as a fun team to play that plays hard, spirited Ultimate, than [for] winning tournaments and not having the mutual respect of the other teams and coaches.”

Coach Khalif concludes: “…being only use to Seattle ultimate it was good to get out and see what other schools had to offer. Each game was different and helped increase my coaching experience and overall ultimate experience.”

When I think about an ultimate tournament, whether Spaghetti Western or any other, there is a whole host of feelings, memories, and experiences that recur and yet are unrepeatable come to mind. What we encounter on the field and on the sidelines is meaningful and teaches us more about life in several intense hours than we usually get in the day-to-day. For this, I want to extend my thanks to all the players and coaches who contributed their thoughts and impressions to share with our readers. I hope we continue the dialogue, and to see you all next year at, as coach Josiah put is: “The best tournament in the west!”

Check out the photos and final standing!