Youth National Championships 2015. Two coed teams, one from the West Coast and the other from the East Coast. They train all summer for a chance to win gold. In pool play the San Francisco Bay Area team prevails over Washington D.C. in a very close game. After winning their respective semis they face off again in the final. For the first half of the game, the two teams spar under a summer rain until lighting interrupts the competition. After a three-hour delay due to weather conditions, the match is back on. 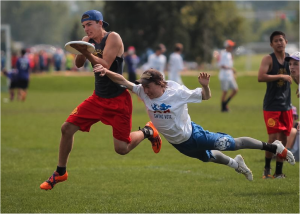 The level is high and both teams are solid. Bay Area has a couple chances to seal the victory but D.C. never gives up and ties the game. Regular time is over and the champion will be decided by one sudden-death point. Both teams get their hands on the disc for the win, then a disputed call near the end zone takes away everyone’s breath (in Ultimate there are no referees and players need to resolve any conflicts occurring on the field.) One pass later, D.C. comes down with the disc for their first national title.

With all the ingredients of a major sports drama, you’d bet that Bay Area and D.C. are starting a deep-seated rivalry that will last for years to come. But wait, what’s happening? Instead of fueling the fires of animosity and resentment, the two teams are making a spirit circle and expressing their respect for each other? And, after all that, they are deciding to play a tournament together?

When I learned that Bay Area Happy Cows and D.C. Swing Vote are fundraising to reunite in Illinois this October to compete together in the College Division of the Chicago Invite, I wasn’t surprised. Ok, actually I was. This kind of thing isn’t unusual in Ultimate but it’s always exhilarating to behold, yet again, Ultimate showing that a different way to play and enjoy sports is possible. And it’s especially cool to see the next generation living the spirit even in high stake situations.

Inspired by this outcome, we invited a player from each team to share their experience at the USA Ultimate Youth Club Championships in Blaine, Minnesota. Enjoy Anders and Chloe’s perspectives! 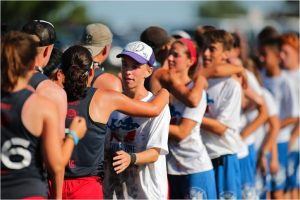 The spirited relationship and mutual respect shared between D.C. Swing Vote and the Bay Area Happy Cows evolved the day before the championship game. During our Saturday pool play game, I knew that both teams were committed to Spirit of the Game – the level of play was the highest I had seen all weekend; both teams remained spirited, not arguing about calls, and displaying extensive knowledge of the rules. Even though the Happy Cows won 11-9, every Swing Vote player agreed that it was the most fun game we had played and both teams wished for a rematch in the finals.

The championship game was surrounded by a completely different set of circumstances from our pool play game less than 24 hours earlier — different field, weather, and reward — yet the energy and attitude on the field remained the same. Competition was fierce, yet spirit remained high. During the first half, both teams each scored three breaks, ending on serve with the Happy Cows up 7-6. Right as Bay Area scored to take half, the tournament director marched onto the field, ordering everybody to disperse to their vehicles. So the two teams and their armies of fans and parents marched to their cars, not knowing how long the intermission would last.

While standing in the over-crowded lobby of a nearby Target, we mingled with players from Atlanta, Boston, and North Carolina for a few minutes only to be ushered back into our vans. “Is the game back on?” we asked, but were then informed that we had been invited to the Happy Cows hotel. Relieved to get out of the smelly vans, we met them in a conference room filled with food and games. I was amazed by the fact that even though the room was packed, the other players graciously made space and invited us into their conversations and card games. Never before have I witnessed so many teenagers instantly become friends.

After taking a group photo, the coaches came into the room. They informed us that the players had a choice to make: we could either go and play the second half, basically starting a new game to seven, or we could call the game and just hang out at the hotel. From a Swing Vote perspective, the choice was obvious; calling the game would result in a loss even though the score was even (on serve). We were not out of the game yet and wanted to finish it. So we met the Happy Cows in a big circle, not knowing what to expect. On one hand, ending the game would leave them national champions, but if we played out the game, the Cows may very well lose.

Although it seemed like a tough choice to us, the Happy Cows had unanimously decided that they wished to play the rest of the game. My teammates and I were smitten. It was as if the Cows had not even considered ending the game. No matter how badly they wanted the win, they felt like they needed to play a complete game, not leaving us feeling cheated. So both teams headed back to the field, prepared to battle it out for the U-19 mixed national title. 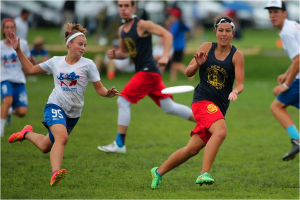 Even at the most elite levels, Ultimate is about more than just winning. Winning is fun, but at the end of the day, the reason we all play this sport is to be part of community that is both competitive and compassionate. This was exemplified this summer during Youth Nationals.

The Happy Cows perfectly struck that balance this year in our games against Washington D.C. Swing Vote. We faced Swing Vote twice over the course of the tournament, during pool play and in the finals. Both games were intense and competitive, but never at the expense of mutual respect of our opponents.

However, it was the lightning delay that really forged the camaraderie between our two teams. During our three hour “halftime” of the finals, the Happy Cows and Swing Vote hung out in a hotel together talking, eating snacks, and playing cards. Most other sports would call this behavior “fraternizing with the enemy,” but in Ultimate there is no such thing as an enemy. Your opponents are simply people with the same goal, the same passion, the same drive as you. Why should you despise someone for that? When it came down to it, we were just a bunch of kids, taking shelter from the storm and chilling with our friends, old and new. 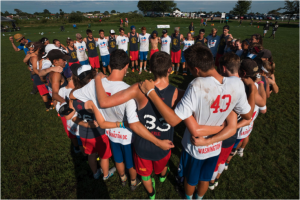 When the storm ended, we got back out there and played the most insane half of Ultimate I’ve ever seen. I won’t deny that it hurt a little to walk off that field not victorious after double game point, but that disappointment was by no means resentment of our opponent. You can’t resent every team you lose to in Ultimate, or you’d be hating everyone before long. In the long run, developing friendships is more important than winning. You can only call yourself a champion until someone else takes the crown, but there’s no time limit on friendships. We are continuing to build this friendship by entering the Chicago Invite this October with two teams, a men’s and women’s team made up of players from both Swing Vote and Happy Cows. So far our teams have written an exciting story together and we’ll see where the next chapter takes us.